Thursday was Internet day. I hung out with Tad, the Internet specialist (he has an official name which escapes me right now). Tad spends all day at the systems updating the web with stories.

As a web developer, I took a lot of interest in what was involved with updating the KCCI website. I was (kind of) surprised to find out that everything is managed with a CMS provided by Hearst, and not many design-oriented options are available. The main publishing company takes care of all the devel0pment, and the individual station takes care of adding the content.

I don’t want to reveal too many trade secrets, but KCCI is, on average, the leading station in the group of 27 Hearst broadcast stations for Internet hits and page views. Tad does a great job constantly updating, and it makes KCCI a powerful online news source.

I got to publish a couple stories from the AP Wire, so that was cool.

End of the week – it was a great first week!

Today, I learned the most I’ve learned so far. I was on the photography track, so I went out with Glen and Steve Karlin to get a VOSOT and a package 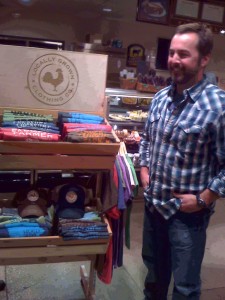 We started by visiting the radio station of the lady whose flag allegedly got taken down and cut up. Her station CEO presented her with a new flag and we filmed that; it was a basic shoot.

We then went to talk to some guys who had just launched a clothing company promoting locally-produced goods. Steve interviewed the CEO and the President of the company in a market before visiting a couple other Des Moines locations selling the clothing line.

Steve did a standup, a tease for a bump, and a whip (which I’ll explain later). We got back to the station around 1pm, and I watched Glen and Steve put together the story, from start to finish.

The great thing about today was seeing a package made from start to finish and really observing how a reporter like Steve Karlin puts together his stories. 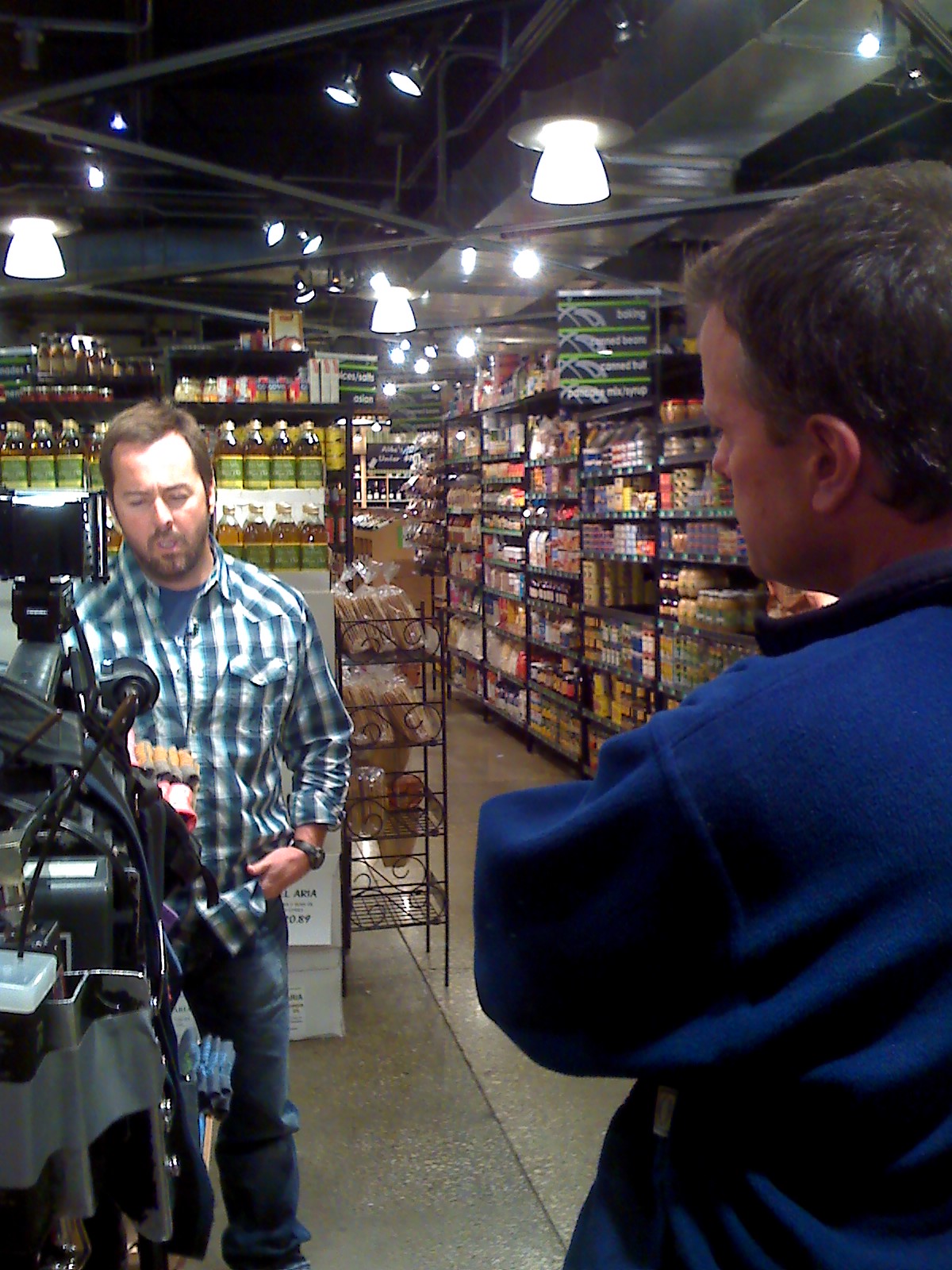 Just the day before (Tuesday), Steve had put together package about a 100 year old woman in a care center who played the drum for the residents. That story really exemplifies his style: short, sweet cuts that let the video and people in the video tell the story.

You don’t see very much of Steve’s face because he lets Edna (the drummer) tell the story. And telling the story in this case doesn’t mean her talking the whole time on camera – her drum-playing and reactions help give the viewer a sense of what is going on.

Steve told me that he makes all his stories in this short, attention-grabbing manner – whether it be a murder, a soft feature, or any story that could have potentially been a boring grab-and-go story. Glen the photographer shot A LOT of t-shirt B-roll.

He also told me rules for his own standups (when and where they’re used in the story). Most importantly (to me, at least), I noticed how Steve was planning his package from the moment he started the interview.

He told me (and I’ve experienced this, too) how you can “catch” sound bytes as they’re said during the interview – so when someone says something that sounds like it could go into the story well, it’ll be noted in Steve’s head and he’ll later write it down and use it in the story. 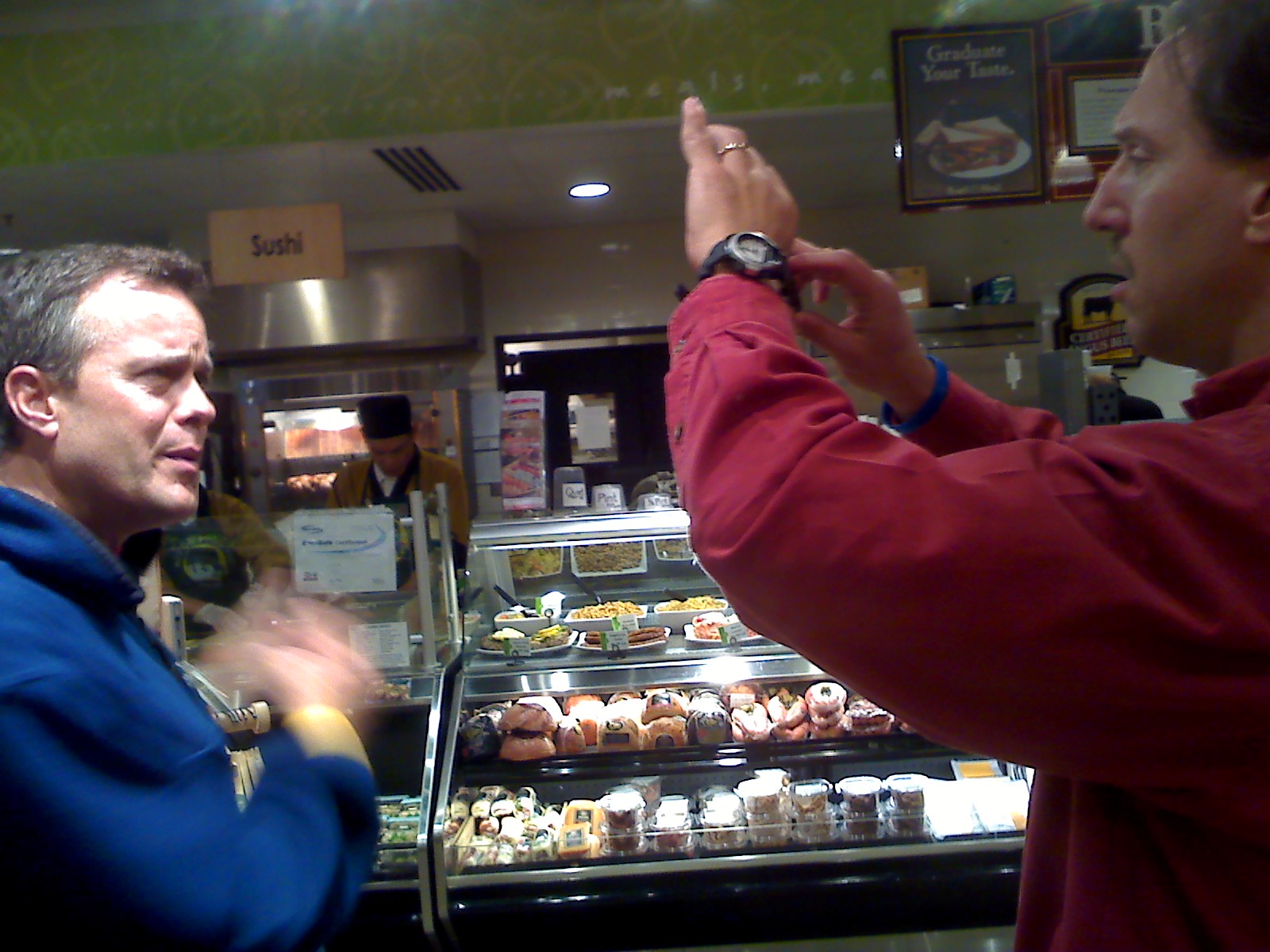 I saw what Heart Corporation has called Next Generation News in action today. Reporters are asked to create “whips,” or short, less than 30 second clips they can send to the newsroom on their BlackBerry phones and get on the web. They basically act as a tease to watch the newscast later that night. Steve made one where he showed the clothing stand and spoke about how Iowans are latching onto a new trend and expressing themselves in a movement for locally-grown goods.

He also sent a few photos with his phone (they have a pretty decent photo quality).

This process is what I assume to be an effort to get news out there more quickly. The KCCI website is the most visited website of the entire group of Hearst broadcast stations, with the Boston market coming in at a close second. If reporters can send in pictures and whips, in addition to having a staff member update the web all day, it keeps viewers engaged and creates a whole new medium for news interaction.

Why We Do What We Do

Steve also talked to me about why we, as journalists, do what we do. Putting reasons like the “fourth estate” and informing the public aside, it really comes down to the fact: we love what we do. If you have a job where you make a ton of money but have to sit in an office building all day, eagerly anticipating the day you retire – what’s the point?

Today reaffirmed my decision to be a journalist: I get to utilize my creative abilities with writing and photography while visiting interesting people and learning new things everyday. Today was a good day.

Tuesday was cool! The story idea I suggested (courtesy of my mom) made it as the 6pm lead: How do suspended drivers get their licenses back? Angie Hunt from the Ames Livelink (who also teaches at the Greenlee School at ISU) covered the story. It was pretty cool to think that the idea I proposed became a news story. It was also interesting to see how the producer of the 6pm shaped the newscast to make that story – which would be of lesser importance if there were something more exciting – the lead story.

I was in the “producer” track, so I asked around to see if any producers needed my help. Megan E., the 5pm producer, had me sit down next to her while she put together the 5pm. Structuring the show is much more complex than structuring a show at ISU. The system used is called ENPS and was developed by the AP. It is MUCH easier to use and more functional than EZNews, the software used at ISU. Each block is split into individual segments. For example, a package is surrounded by a “lead” (the intro) and a “tag” (the outro), and makes up one segment. The anchors have built-in anchor cues, and the software translates everything to both the teleprompter and to the closed captioning system.

The graphics are pretty interesting as well: at ISU, we have to make our own graphics in Photoshop using a template which is stored on a server or held on a flash drive. With ENPS, a template is already available within the program. The only thing the reporter or producer has to do is type the textual information, and the CG lower third is produced and pulled up during the newscast. This saves time and effort but probably has eliminated some positions in the newsroom. This is an example, I’ve learned, of how news stations are cutting costs.

I sat next to Megan during the 5pm in the control room. It went as expected; she was able to communicate with the reporter in a live shot and with all other members of the crew through the intercom system. Stories had to be cut to keep time (the 6:30pm CBS Evening News is on immediately after the 5pm newscast ends), and the wrong show was loaded in the very first block (so there were some visual errors).

It was great learning about producing by watching. I hope to learn more by actually getting my hands dirty by writing some stories. I come in at midnight this Sunday to help produce the 5-7am newscast that morning, so hopefully I’ll get a chance to do some real work!

Today was my first day at KCCI as a news intern. I started at 9:30am sitting in a news meeting, where everyone present is expected to give a story idea. This is where the assignment editor, reporters, news directors, and some photographers plan their day and who is going to shoot what.

I hung around the newsroom for a while until I went out with Amanda Lewis and photographer Glenn. We went to dig up more facts on the recent Ankeny crash where two children were killed. We started by looking up a prior case involving one of the drivers at the Courthouse. We then went to the house listed on the driver’s license, and talked to his ex-girlfriend. Driving to Ankeny, we visited the courthouse there and spoke to an officer regarding the case. Finally, we talked to a woman in the third car involved in the accident. We got video/sound from both the police officer and the woman.

By this time, it was after 3pm and the story had to be on air by the 5pm newscast. It was crunch time, so Amanda worked on writing the story and logging tape, and Glenn cut the VO and SOTs for the newscast. The story went on as a package for the 5pm wrapped by Amanda sitting on set. She changed it a little bit and used just VOs and SOTs for the 6pm.

Later that night, Todd Magel used the footage when he gave an update to the story on the 10pm. It was interesting to see how much 10 minutes of simple, well-shot interview footage and B-roll can be used on three different newscasts in different ways.

I definitely learned methods of calling and contacting people, as well as asking for information, by listening to Amanda.  I also learned how to handle when someone tells you something in an interview but then is afraid you’ll use it in the story. Technically, you can use anything that is said to you (ethically) as long as they don’t specify that the information is off-the-record beforehand. However, it is good to keep good relationships with your contacts and agree to their wishes (as long as it doesn’t have a massive impact on the story).

I’m sure I have much to learn as this was only the first day, but I look forward to what is to come!