Today was Geoff Greenwood’s last day. We started off with a goodbye celebration in the newsroom. Words were read and cake was eaten. It seems like Geoff has had a great career at KCCI – starting out in production, then becoming a photog, then photog/reporter, then full-fledged investigative reporter. It sounds like he’ll be greatly missed by not only KCCI but by other stations who used him as a legal liaison.

Geoff will be moving to the Attorney General’s office to fill the position left vacant by a retiree. I’m sure he’ll do great.

I ended up going out with Mark Carlson and David Peterlinz to look into how Des Moines hosting the 2013 NCAA Wrestling Championships will affect the Des Moines economy.

We spoke to the director of the Greater Des Moines Convention and Visitors Bureau in Nollen Plaza. It’s a very nice place.

Next, we stopped by the USA Track and Field Championships at Drake Stadium to talk to some athletes. We had a limited number of press passes, so when sports reporter Scott Reister (sp?) and fellow ISU intern Erin Karonis showed up to cover the actual event, I had to give up my pass.

Below: Pictures of our live truck setting up for the live sports segment from the meet. 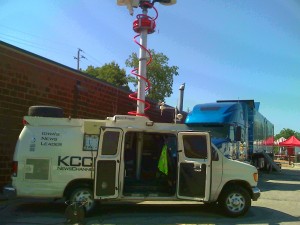 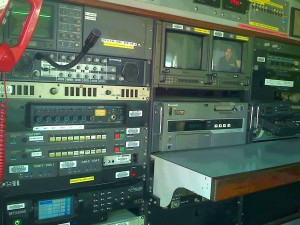 The inside of the live truck

Making quick work, we then headed over to Clear Channel radio in the 1040 WHO radio studio. Steve Daise was interviewing Bob Vander Plaats, and it was possible Bob would give an announcement regarding his intentions to run as an Independent in the 2010 Gubernatorial race.

If Vander Plaats decided to run Independent, it would likely split up the Republican party and give Chet Culver (D) a chance to win.

Unfortunately, after waiting nearly an hour for him to give any clear answer, he said he hadn’t yet decided if he would run as Independent. He only spoke about controversy regarding him running as Lt. Governor with votes at the Republican State Convention, set to take place the next day.

We packed up and left.

David dropped off Mark at the station, and the two of us went to Urbandale to get a VO/SOT of a man hitting softballs for a cause.

Christian James was hitting 2500 softballs in 5 hours to raise money for charity. 50% of the money was set to go to the DeJoode family’s daughter’s college fund.

We grabbed some sound, and I did a practice standup.

When we returned, I wrote the story for the 10pm (we didn’t end up using a SOT… in fact, I think they ended up killing the story). I also got myself together and re-edited the entire texting ban story. Not my best, but getting better.

Today was Thursday. Not super sure what I did on this day. But it’s likely that I wrote stories and worked on producing.

I came in early today to work on that package (mentioned below).

I ended up showing a high school student around who was visiting to shadow for the morning. His mom is on the Des Moines PD, and he wanted to see how things worked.

Unfortunately, due to flooding up north and other things happening, there were no reporters in the building, and the entire newsroom was pretty dull (we didn’t even have a morning news meeting!).

I struggled with my package, and learned the limits of linear editing. When I kept accidentally writing over the audio, I got frustrated and gave up.

And that was about the same time I got a massive headache. On some days, I would fight through it. Today was not that day.

I went out with Steve Karlin and Glen to check out how levels were looking from Saylorville Lake down to Lake Red Rock.

We stopped down at the Birdland area and got on some rafts/docks the crew clubs use to get up close to the high river waters. 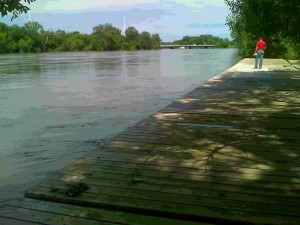 Steve Karlin and the rising river

It was terribly hot, and we ended up coming back. I started work on re-cutting a package that Alex Murphy had done the Friday before about the texting ban set to take effect July 1st.

I also worked on putting together some national news segments/B-blocks for a sample show.

“Bring your family to internship day.”

Not really, but I did it anyway.

My parents were in town, so they stopped by around 11am. I showed them around the station, introduced them to people, and they watched the noon newscast.

We then ate at Jethro’s BBQ in Drake Campustown afterward. Great food!