I suck at blogging.

Instead, I’ll write in a different form:

The fresh snow fallen before dawn on February 2, 2011 meant it was my turn to shovel snow outside of my fraternity house. I wasn’t alone: four other brothers joined me.

We all braved the cold, taking different sections of the driveway and sidewalk with our shovels, colored blue and yellow. I felt the crunch of untouched layers of frozen slush as I walked down the sidewalk to the border of our property. To the east was Pi Kappa Alpha, and past them was Phi Kappa Theta.

Shoveling – more like chiseling – the crusty layers of sidewalk snow, I noticed the men of Phi Kappa Theta were doing the same at the end of the block – joining each other outside and shoveling by hand.

Arms burning and face numb, I went in two-foot intervals down the sidewalk before taking short breaks. As I became closer to the steps to our house, the sound of the sputtering snowblower became more apparent. A brother of mine was pushing the machine, clearing the entire span of our driveway and struggling to unpack the hard precipitate thrown onto our property by the city snowplows.

Several other brothers were now advancing toward the street, shovels glistening in the morning sun, being tossed around by the sub-zero winds. It was then that we became aware of our next-door neighbors’ presence:

“HEY BETAS…GO F*** YOURSELVES!” screamed a male from a window of the Alpha Tau Omega house to our west. “IT’S NINE O’CLOCK IN THE F***ING MORNING!”

A couple things about the young man’s statement made me reflect:

Walking home from meetings on campus, I noticed the first two sidewalks starting at the west end of the block have yet to be touched by their owners. Not one person from Sigma Chi or Alpha Tau Omega has been out to shovel and make way for patrons.

However, starting at Beta Theta Pi and moving down to the end of the block, a path is cleared for students and the public to easily get where they need to be.

While it’s just snow, I can still say I’m Proud to be a Beta. 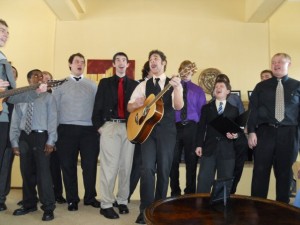