It’s a question I often get after telling people what I do on the weekends. To be specific, I produce the Saturday and Sunday morning newscasts. But unlike reporting or other on-air talent, most folks don’t know what producers actually do. Hell, I hardly knew until I became one.

Recently, I’ve found myself explaining my weekend, overnight job to more than a handful of people. And now I’ll explain it to you. 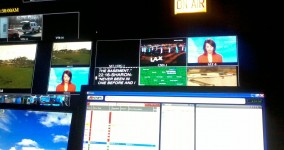 My view of the show while it's happening.

That’s how I felt about my senior year at Iowa State University. Working weekend nights isn’t exactly what you dream of when you’re hoping to have lots of final memories and adventures with your pals at college.

But when it’s about 10pm, I start my drowsy commute southward and don’t stop until I hit the city of lights (Des Moines – in case you were wondering). I’m on the clock from 11pm til about 9am on Saturdays, til 8am on Sundays. That’s a 10-hour workday…worknight…workeve.

My buddy Steve and I put together newscasts in half-hour chunks. Normally I’ll work on the first 30 minutes of the hour and he’ll work on the second. While a lot of stuff gets copied from hour to hour (mainly the news block), there is plenty of room for originality and creativity. And I’ve found a lot of that creative work is teasing you, the hypothetical viewer, about what’s coming up next on our glorious morning newscast.

Stick around, because when we come back, you will witness some AWESOME STUFF. SERIOUSLY. DON’T CHANGE THE CHANNEL.

We do work on a deadline, and with an hour before showtime (5am), we need to have nearly everything finished so the anchors and look through and the director can finalize his or her rundown.

Ever been around kids? Or a group of kids talking about random crap you don’t care about?

Well, imagine this: the kids are yours. There are seven of them. And they’re talking into tin cans at the same time. You tune it out, just as one of your youngest offspring whispers, “Daddy, the house is on fire.”

It’s not unlike my experience listening to the scanners on a weekend evening. I don’t know if the lovely patrons of Central Iowa enjoy going nuts, driving drunk, and falling down – but they’re sure good at it.

Scanners are important to a producer like me; if something happens, I need to know about it so I can decide whether or not we should send a photographer. That sounds pretty easy, right? House fire, car accident with major injuries, explosion – all good things for which to keep an ear open.

However, the noise is difficult to filter. Here’s my theoretical list of the most common calls spoken through the scanners overnight:

And then, out of nowhere, BAM! Something bad happens. And I swear – it’s always on one of the scanners that’s not quite as loud as the others.

Scanners are both friends and foes. But mainly friends in an otherwise lonely newsroom.

If you haven’t gathered by now what my official job is, here it goes.

I decide what’s on the news. What is newsworthy? It’s the question I have to ask myself constantly. Lots of times it’s easy to know what story should lead the newscast – other times, it’s like trying to decide what color of M&M tastes best… it just doesn’t matter.

But after I’ve decided what’s on the news, I put it in a coherent, well-paced order. Then, I write and rewrite the story scripts for the anchors to read.

We choose the video we’re going to use, edit the video, put it on tapes, and send it to the engineering room. We finish writing our scripts, print the scripts, and before long, it’s time for the show to air.

During the show, our main job is timing. We have a good estimate of how long each story is going to take, and our scripting program lets us know how that compares to the time remaining in the newscast. If we don’t have enough time, we “kill” stories – that is, tell everyone that the story is no longer going to be in the newscast and it’s gone forever.

Other times, we have to fill time. The other day, we were supposed to have a live talkback (fancy word for interview) with a senator. Unfortunately, we had technical errors, and 30 seconds before we were supposed to have the interview, I had to kill it. Woah – all the sudden, there’s 10 minutes left in the show and only 8 minutes of  content. You have to think quickly to fill that period of time, get anchors new scripts, and make sure we have the tapes we need.

Timing can be stressful, but normally it goes off without any major hitches.

OK, that’s enough for now. I might write some more about producing and tell you crazy stories…when I think of them.