A short five years ago, I wrote an essay for my English Composition I class at Iowa Central Community College. Though I was only a senior in high school, I think I knocked out some pretty good paragraphs.

My grandmother is still alive, living in the same nursing home I write about below. The last time I saw her was at my uncle’s funeral, sitting in her over-sized, makeshift wheelchair made from an array of plastic PVC pipe. She still looks the same, but all she managed to effectively communicate with us young folk was a seemingly-cryptic message about grapefruit and fuzzy people. Alzheimer’s sucks, but it’s a part of life.

As my dad entered the password granting him and me access to the Alzheimer’s unit at the Stratford Rehabilitation Center, I came to the realization that a lot had changed over the past year. My grandmother’s health had been slowly deteriorating over the last few years, and we were finally forced to put her in the center when the symptoms of Alzheimer’s disease became too evident to ignore. The decision to move my grandmother was not an easy one for my father or his siblings to make, but it was made for the better interest of my grandmother.

I followed my dad down the hall of the Alzheimer’s unit while simultaneously being greeted by several Alzheimer’s patients who were mildly confused of their whereabouts. The door to my grandmother’s shared living quarters was the fourth down and to the left in the pale-white and dim hallway; we entered and sat next to her bed. She was napping until we softly greeted her and gave her a bag of goodies.

Today was a special day; today was Christmas.

For as long as I could remember, Christmas Eve consisted of my family and I attending the Christmas Eve service at my church in Stratford and then spending the major part of the evening at the house of either my uncle John’s, my uncle Bill’s, or my grandmother Eileen’s. The nearby-presiding sons of my grandmother normally came for the dinner and for the social time afterwards.

The group of elders sat around and talked about current events and happenings in the small town of Stratford and the surrounding rural area. Being young children, my sisters and I usually drifted to sleep as the clock approached midnight and as the adults’ dull conversations rolled on.

Call it old-fashioned, but my entire family has always had a liking for old-time folk music. I can remember a particular time several years ago in which a few of my uncles brought their guitars, mandolins, and fiddles and played a few tunes at my grandmother’s house on Christmas Eve.

The uncles would pick their way through several songs ranging from “Red River Valley” to “Silent Night.” Because of my moderate experience of piano playing, I was asked to sit down at my grandmother’s old piano and play along; accompanying old guitars, fiddles, and mandolins was a new experience for me.

As I sat down on towel-draped, less-than-sturdy piano bench of my grandmother’s, I looked at the old wooden instrument. A tap on the keys would reveal that it was horribly out of tune to a trained ear – older people like my grandmother and great-aunt couldn’t hear the dissonance in the pitch. Various gospel and old hymn books were scattered across the flat top of the piano, and the ripped and browned edges of the single sheets of music added a sense of age to the pieces in front of me.

Stumbling and trying to keep up with my uncles had never been so invigorating to me. I looked over periodically to see my grandmother and aunt smiling, tapping their toes, and closing their eyes; their enjoyment of the music that I was helping to make brought even greater joy to me as I continued to pound on the faded black-and-white keys. “Play me another one,” my grandmother often asked, rocking in her and smiling, whenever my uncles and I stopped in between songs.

Playing the piano that night was making me excited, happy, and energized. I hadn’t expected this kind of symptom to be present while playing a musical instrument, but it was present more than ever that Christmas Eve. The hours passed too quickly, and midnight arrived before anyone had realized. Leaving the piano felt drastically different than how I’d felt about being finishing my fifteen minutes of forced-practice at my house during the five years preceding this moment. I felt like I wanted to keep playing into the night and keep spending time with my family with the sound of music.

Things were different for me for a number of reasons after that Christmas. I started to spend more time at my grandmother’s house because my dad had to bring her medicine almost daily after she was diagnosed with a form of dementia. It wasn’t uncommon for me to visit her once or twice a week during the summer. She would always ask me how school was going and what was happening up at high school, what sports I was in currently, and how my teachers were treating me.

Over the course of weeks and months, she began to ask the simple-information inquiries more often and it started to become more commonplace for her to repeat herself. I was coming to the reality that my grandmother was starting to slip away mentally and that I couldn’t do anything about it. Among the mild disarray of thoughts in her head, there was apparently one thing that was still solid. She always asked me to sit down and play something on her old piano when I was visiting. “I know it’s probably out of tune, but it’ll be fine,” she would say every time, and each time I would sit down and get that same rush and excitement that I’d gotten that Christmas Eve a while back.

I believe that music has a special power.

I think that it can act as a medicine in a way, yet in some cases it can be more powerful. I am sure that even as my grandmother’s disease progressed, having me sit down on the piano and play a song or two for her connected her with her past, her family, and what was familiar to her. Having the power to do that for her gives me unmeasurable joy, a joy that I can’t really describe. Looking back on the Christmas day my dad and I visited my grandmother in the care center makes me remember what playing the piano really did for her and I. I’m sure that if there was a piano in the Alzheimer’s unit on that Christmas day, my grandmother, though in her mentally limited state, would still have me sit down at the piano and play what I knew.

For some reason, I know that she would still be sitting near me, smiling while rocking in her chair, saying “play me another one.” 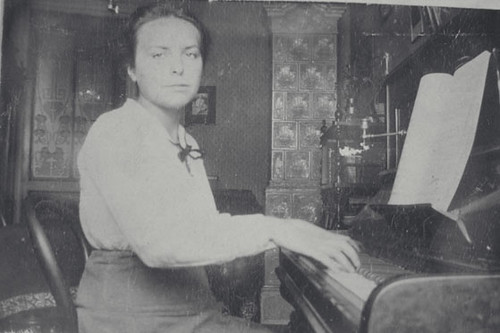 Not actually my grandmother or her piano. I just liked this photo, and it added context.